Blocking of the Channel tunnel, French fishermen “have shown their teeth” 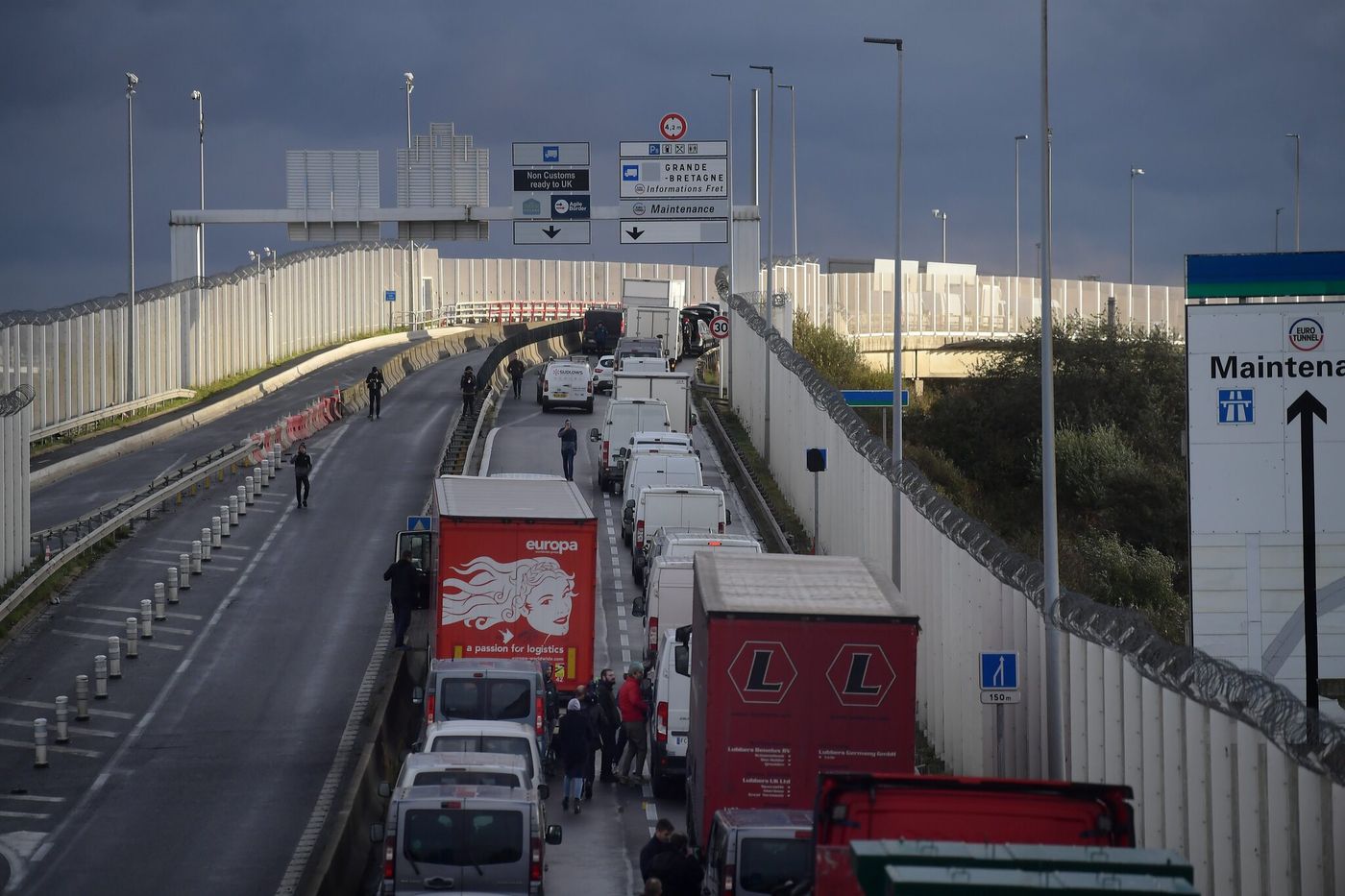 On this gloomy afternoon of November 26, the northern fishermen grouped together on the freight lane to the Channel Tunnel did not come to ” to break “, assures Jean-Michel Fournier, patron of Notre-Dame de Boulogne, “But for Boris Johnson to take us seriously”. Everyone is angry with the English: “They are waging war on us while we have been fishing together for generations”, deplores Olivier Leprêtre, the president of the Hauts-de-France fisheries committee.

It is very wisely, for the moment, that they put pressure on the British and on Brussels. Not at sea but on land, at the Channel Tunnel where 200 fishermen came to block the freight with their professional vans. Just two banners – “We want our licenses back” (“We want our licenses”) and “Licenses refused, fishermen in danger” -, a little smoke, beers and coke: the demonstration is calm but the sailors are determined.

→ CONTEXT. Brexit: faced with the stagnation of discussions, French fishermen are increasing the pressure

“I would rather lose a month’s salary if necessary rather than die slowly”, says Stéphane Fournier, who still has not had his license for his boat The Trinity. Yet it is “Registered since 1991” but he changed boats four years ago and is one of the “Replacement boats” whose license was not renewed by the British.

A crucial end of the year

If they can’t fish in UK waters by Christmas, the end of the year will be very difficult: “November-December, it’s 40% of our turnover, explains Nicolas Margollé, boss of Nicolas-Jeremy, a 25-meter trawler. And this is a time when fish are scurrying through British waters. “ In addition to the problem of licenses, fishermen are worried about the technical measures that the British impose on them outside of the agreements, or new quotas on species that were not yet concerned.

Jean-Michel Fournier, also a fisherman in Boulogne, is worried about the rest: “If we are fewer and fewer and isolated, it will be difficult to continue. ” It was still checked at sea a fortnight ago: “It lasted four hours, stuck doing nothing”, he annoys, worried about the technical measures that the British seem to add constantly, such as the sizes of nets which differ depending on whether you are in European or British waters.

Among the demonstrators, two men wear the blue-white-red scarf. The mayor of Étaples, Philippe Fait, came to support the fishermen of Hauts-de-France, accompanied by one of his deputies. “We would just like the Brexit agreements to be respected, the European Commission must absolutely enforce them because we are being led by boat. Behind these agreements, there is a faltering economy, men and families ”, indicates the mayor of this town near Boulogne-sur-Mer.

→ ANALYSIS. Post-Brexit fishing: how the issue of “fleet exits” ignited the debate

The fishermen say they are supported by all elected officials, local and national, and they hope that Brussels will manage to bang their fists on the table. “This is where it plays out, it’s up to the European Commission to act“, reaffirms Nicolas Margollé.

Some are also disgusted by the speech made by British Prime Minister Boris Johnson on migrants: “He must not have a heart, says Jean-Michel Fournier. With my boat, we have already participated in a rescue. You have to see what these people are going through, they do not cross the Channel for their pleasure. ” Nicolas Margollé and Stéphane Fournier have both already called CROSS many times to report boats in difficulty.

Olivier Leprêtre tries to remain confident: “Things are moving, the British government is already reacting with tweets but hey, that does not mean that we will have our licenses at 5 pm”, he said to two fishermen while welcoming this mobilization which extends from Saint-Malo to Calais.

The fishermen return to their vehicles at 4 p.m. as agreed. The long line takes to the road again, we barely hear one or two honks. Access to the tunnel is free, the hundred trucks blocked on the A16 motorway, will be able to take exit 42a again. “There, we just show our teeth but we also show that we can block everything” , warns a fisherman. “We have been wise, repeats Nicolas Margollé, but if Monsieur Boris does not have a turkey for Christmas, we will continue. “