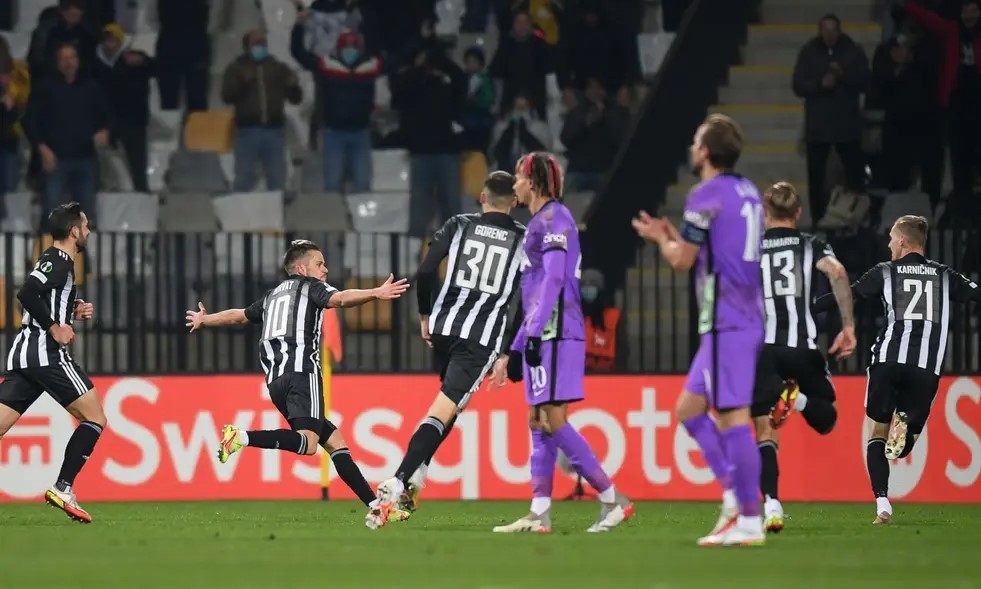 Playing without people, Tottenham conceded a goal in injury time and lost to the bottom team of the group Mura 1-2 in the Europa Conference League, on the evening of November 25.

Mura has no points after the first four rounds while Tottenham need three points to chase the top team Rennes. Therefore, Antonio Conte’s army is expected to soon finish the opponent to save energy for the match against Burnley at the weekend. However, the trip to Slovenia was not easy for them.

Difficulties soon came to Tottenham when Tomi Horvat put Mura ahead. The home team’s striker took advantage of Davinson Sanchez’s slip to go in from the right. His left foot cut sent the ball to a high corner, leaving goalkeeper Pierluigi Gollini grounded.

Conte used many substitutes but still ranked Harry Kane as the main starter. The England striker is supported by Dele Alli, Tanguy Ndombele and Bryan Gil. In theory, Tottenham have individuals capable of breaking opponents. But reality is not like that. Alli and Gil didn’t play well and were substituted early in the second half.

In the 32nd minute, more difficulties piled up for Tottenham when Ryan Sessegnon received a second yellow card for a challenge with Ziga Kous. Sessegnon has just returned from injury and this match is seen as an opportunity for the one-time prodigy of English football to impress Conte. But in the end, he created a nightmare for himself and his teammates.

Kane nearly equalized for Tottenham five minutes later when his shot from more than 10m wide missed the post. But the away team was also lucky not to concede a goal by Nik Lorbek’s finishing situation.

Conte brought on Son Heung-min, Lucas Moura, Eric Dier and Ben Davies early in the second half and the changes took effect almost immediately. Son dribbled past a series of home players before testing Matko Obradovic. This is the first save of goalkeeper Mura.

Tottenham had to wait more than 10 minutes to score the equalizer. The two Mura defenders hesitated to block Moura’s pass and let the ball reach Kane’s feet. With the instinct of a top killer, the 28-year-old striker clicked the ball past Obradovic, although the angle of the shot was quite narrow.

Tottenham raised the squad to find the decisive goal in the remaining minutes. But they tasted bitter fruit at the last minute of extra time. Amadej Marosa sped from the middle of the field and then turned the ball to the left foot to finish. The kick that touched Sanchez changed direction, leaving Gollini helpless to watch the ball go into the net.

This is Conte’s first defeat after four games in charge of Tottenham. The Italian coach may gradually imagine the difficulties that await him ahead. Tottenham only met Burnley, Brentford and Norwich in the next matches. It will be an opportunity for Conte to test more.

In the last match of Group G Europa Conference League, Tottenham must beat Rennes to continue. Even if they do that, they won’t be able to top the group. This means Tottenham must win the play-off match in the first leg and return format if they want to enter the 1/8 round.