Salary or job, a cruel dilemma in times of crisis 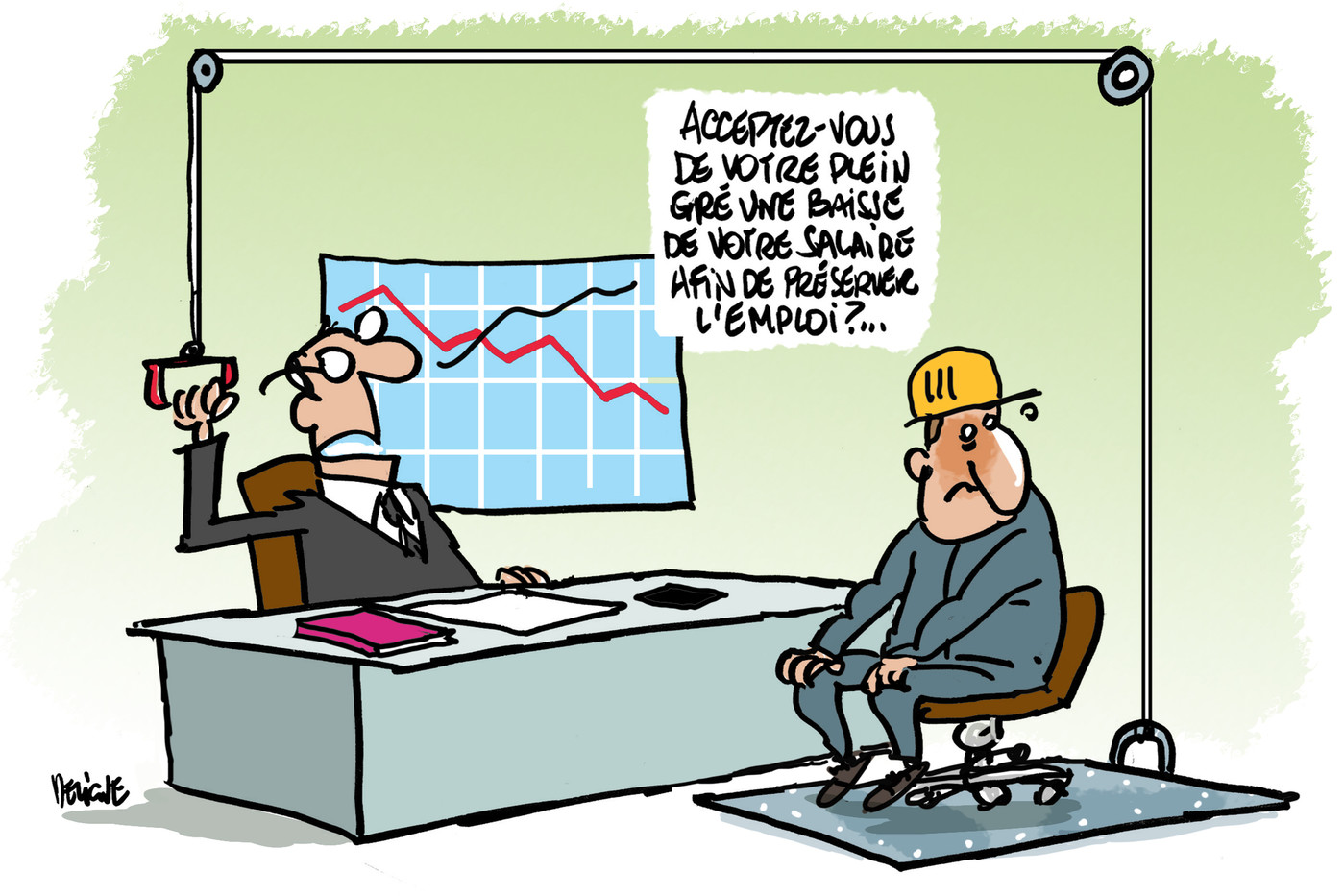 An almost exclusive Airbus subcontractor, Derichebourg Aéronautique was hit hard by the drop in orders from the aircraft manufacturer. “In a few days, we lost more than half of our activity, with an overstaffing of 700 to 750 people”, says Jean-Marc Moreau, general secretary of the FO union of the company.

At the beginning of May, the management of Derichebourg therefore put employees before a difficult choice: a job protection plan (PSE) with 600 departures or a collective performance agreement (APC), with wage cuts and the end of a number of advantages.

→ DEBATE. Should wages be reduced to avoid layoffs?

In his garage, the trade unionist drew up a large table with the advantages and disadvantages of each solution and was helped by an expertise commissioned by the social and economic committee (CSE) of the company. “I spent nights there without sleeping, he confides. Some argued for the PES, saying that it was better to sacrifice a few than everyone else! Our choice was to save jobs. “

In the negotiations, the idea of ​​abolishing the thirteenth month was finally abandoned – except for the best paid executives – but the employees lost their meal allowance and that of transport, pinned down each year by the Urssaf. Derichebourg undertakes not to proceed with any redundancies until 2022. And, while employees are subject to a mobility clause, a bonus of € 4,500 is granted to those who leave Toulouse for Marseille, a site less affected by the decline in activity.

If FO has signed the APC, Jean-Marc Moreau nonetheless recognizes a painful effort. “There was no drop in wages but a loss of purchasing power”. The elimination of indemnities represents in fact € 1,700 per year, to which must be added the end of premiums for night shifts and the reduction in the thirteenth month due to partial activity. 160 employees refused the agreement and negotiated their departure, for various reasons.

Jean-Marc Moreau is convinced of it: the efforts of the employees, some of whom ended up with € 1,400 per month, will be recognized by management when the situation recovers. The APC also plans a renegotiation as soon as the company regains a profitability of 4%.

APCs, a popular tool for employers

Created by the Macron ordinances reforming the labor code, the APCs have become a popular tool for employers to face the crisis by allowing global negotiations on a large number of subjects.

Daily The team, very affected by the end of sports competitions during the first confinement, the management thus proposed an APC providing for a 10% drop in wages and the loss of 16 days of RTT against an imprecise promise not to touch the employment. At the same time, employees learned that the Amaury group, the parent company which has solid financial reserves, had paid 11 million euros in dividends.

→ READ. “The Team” tempted to save on salaries and RTT

“Even though we were congratulated on the quality of our work during confinement, this attitude of the shareholders bordered on contempt”, explains one of the 245 employees – out of 251 – who rejected the APC “For economic as well as moral reasons”. Since then a PSE has been announced, providing for the elimination of 60 positions.

The bad image of CPAs

If he sees in the APC the means of adapting working time according to orders and a “Responsiveness that can avoid layoffs”, Joseph Tayefeh, secretary general of Plastalliance, grouping together the plastics industry, admits that they can also be used by companies that are not necessarily doing badly. These “Defensive APC” would participate, according to him, in the bad image of this tool. “The union delegates who sign want to remain discreet, to the point of not necessarily reporting it to their federation”, he says elsewhere.

→ EXPLANATION. Covid-19: how to avoid a wave of over-indebtedness

This explains the very dispersed trade union order on the subject. At Derichebourg, FO, supported by its metallurgy federation, signed the APC, which Unsa refused. But at ADP (ex-Aéroports de Paris), this same Unsa thus finds itself the only signatory …

Faced with an empty sky, ADP has indeed proposed to the unions (CFE-CGC, CGT and Unsa) three inseparable agreements concerning the 6,300 employees of Paris airports. In addition to the long-term partial activity plan and the collective contractual termination plan covering 1,150 people (with 700 unreplaced positions), an APC was added.

According to management, it resulted in an average pay cut of 4 to 8% with review clauses. In return, the group undertook not to lay off for three years. “The negotiations were very satisfactory and were conducted in an excellent state of mind, says the CEO, Augustin de Romanet. But it was impossible to go further in our proposals. “

According to Unsa, the economic situation has never been so dramatic at ADP. “The majority of our supporters, but also 1,200 other employees, told us they wanted the agreements to be accepted for a job guarantee against bearable efforts, said Laurent Garssine, general secretary of the union which represents more than 17% of the workforce. Today, there is clearly a threat of forced departures. “

The difficult assessment of wage cuts

First ADP union, the CFE-CGC points to an underestimation of the drop in remuneration. “We were ready to make an effort. But the loss of income would have exceeded 8%, even 15% for some. “, says its president Véronique Pigueron. The management wanted to touch on elements of compensation that are variable according to the employees, and, for many of them, the decrease would have been lasting. “

ADP’s CGT has also chosen to extend the consultation of employees beyond supporters. “We ran the risk of having to sign a text with which we disagree”, underlines Daniel Bertone, its general secretary.

Faced with rejections from APCs, some departments do not hesitate to negotiate directly with each employee. “After the rejection of the elected members of the CSE, the management began negotiations with each, proposing, for 2020 and on a voluntary basis, a reduction in salary, says a technical manager of a medium-sized industrial company in Île-de-France. They wanted to take the equivalent of a thirteenth month from me, I told them “niet”. But I still let go of € 1,500. I am well aware that they do not offer it for fun. And I told myself that I will review the sum if the situation improves. “

The company as a “common good”

“If we had been cynical, we would have closed the box outright. But it didn’t even cross our mind ”, says Nicolas Masson, managing partner of the management consulting firm Pragma. With only ten employees, the APC solution would have been too heavy. “We preferred to bring them together to explain the situation to them and then discuss with each an amendment to the employment contract. “

The employees then accepted a reduction in remuneration. “They appreciated our frankness but this transparency obliged us: considering that the company is a common good, we reworked our offer but also our whole way of working”, explains this member of Entrepreneurs and Christian Leaders (EDC).

For him, this type of agreement cannot indeed work “If we don’t think more fundamentally about the community that is the company” : ” There are certainly wages and employment, but we must also act on the social link and the organization of the company, otherwise, it remains wobbly. “

Created in 2017, the collective performance agreement (CPA) replaced the job retention agreement. It makes it possible to modify working time, remuneration and the conditions of geographical or professional mobility.

It must be signed by the majority trade unions when they exist in the company, or by the social and economic council (CSE). In companies under
11 employees (less than 20 in the absence of a CSE), the text proposed by the employer can be directly ratified by referendum.

If validated, the APC takes precedence over the individual employment contract. If the employee refuses it, he can be dismissed. A “return to better fortune” clause may be provided for to revert to changes in the event of an improvement in the company’s situation, but it is not compulsory.

In July 2020, France Stratégie identified 371 agreements concluded between January 2018 and June 2020. They were particularly numerous in design offices, plastics and metallurgy.